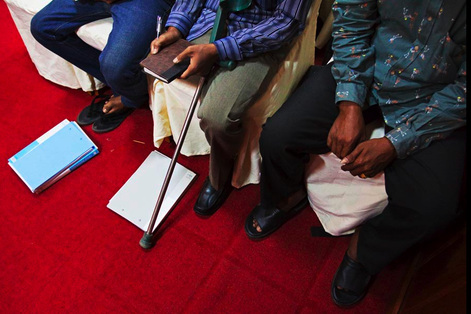 photo by Prabhjot Singh
As a consequence of thirty years of war, 6 million unexploded landmines maim and kill thousands of Cambodians each year. There are more than 300,000 Khmer with disabilities. One of the highest percentages in the world.
Disabled people here in Cambodia are second-class citizens. Often shunned by their families, rarely hired by employers, and with little or no access to health facilities, many of these people - in particular those who live in the poorest and most remote provinces - lliterally die of hunger.
Since the atrocity of the Khmer Rouge genocide, which decimated the population of Cambodia and destroyed its education, healthcare and economic systems, her people have struggled to overcome obstacles on the road to recovery. For children living in the villages, streets and city dumps, the issues of poverty and lack of access to proper healthcare and therapy, as well as the breakdown of the family unit, make survival a daily challenge.

Whether orphaned, abandoned due to their condition, or living with poverty-stricken families that simply lack the resources to properly care for them, the outlook for these children is bleak. It is not an uncommon sight to see such children begging on the city streets, their bent and broken bodies used as a source of income for others. For those who have no mobility on their own, even when they are taken in by well meaning orphanages and shelters, their lives are limited to simply existing. With all of the problems facing Cambodia and her children, the resources, time and energy it takes to help handicap people and children reach their full potential simply do not exist.

The aim of the Khmer Independent Life Team (KILT) is to end the cycle of poverty caused by landmines and disabilities and to provide jobs for people with disabilities, allowing them the opportunity to have access to the resources that they need in order to reach their full potential and their highest level of personal independence.